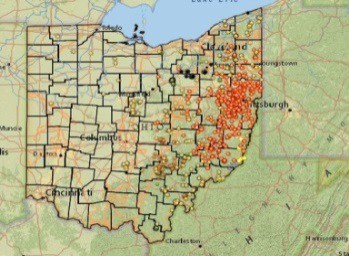 The hottest development in speculative land investing in Ohio –

The simple answer to “What is fracking?” is: gas drilling (hydraulic fracturing). But there is nothing simple about what it effects on the land, planet and its inhabitants.

It is a practice that has exploded into popularity among those who see the dollars (as much as $100 Billion!) that lie in the gasoline beneath the surface. Fracking has caused tremendous community and planetary uprisings against its short-sighted, destructive, personally and planetary uncaring practice. It causes pollution, earthquakes and it negatively affects the communities that live where the fracking takes place.

Lest you think that is an overstatement, according to Bloomberg Business (Bloomberg.com), Oklahoma – a bastion of middle-America land stability – now has a greater number of earthquakes than California. If that doesn’t shock you, you are not paying attention. Let us help you:

“So far this year, Oklahoma has had more than twice the number of earthquakes as California, making it the most seismically active state in the continental U.S. As recently as 2003, Oklahoma was ranked 17th for earthquakes. That shift has given rise to concern among communities and environmentalists that injecting vast amounts of wastewater back into the ground is contributing to the rise in Oklahoma’s quakes. The state pumps about 350,000 barrels of oil a day, making it the fifth largest producer in the U.S.” https://bloom.bg/1MIbt1i

As usual, it is financial greed that drives the kind of destruction that fracking effects. The U.S. is, as General Electric CEO, Jeff Immelt, puts it, “the Saudi Arabia of natural gas.” That makes us as desirable to big business as sex is to a teenager, and just as irresistible. There are, however, ways to stop fracking, to protect the land and our communities as we use our voices to speak up, stand up, and say no. A beautiful and heartening example is the upstate New York community of Dryden, which fought big business – with its billions of dollars and heavy clout – and won, against incredibly heavy odds. The 11-minute video about their challenge and win, didn’t just win many film awards, but set a standard for the rest of the courts and the country to follow in disallowing this destruction of land, communities and quality of life that we must follow if we are to stand against the type of greed and shortsightedness that puts money before quality of life.